I feel your pain, I just went through the joys of rear bearing replacement this past weekend.

Nice work getting it done on the car. I expect that would increase the difficulty a notch. I'm stalled with one axle apart as I haven't gotten around to taking the arm up to a shop to have them get that nut off yet. I also noticed recently that the outer bearings I ordered aren't correct. They were listed as fitting my car but when they arrived it was pretty obvious they were too big. I still need to sort that out too. Even though progress has stalled on the rear arms and axles I have been making good progress on getting my rear differential cleaned up. I hope to have that done soon and then I will get back to the other bits.
The company motto seems to be "We're not happy 'till you're not happy."
Top

The other thing to watch when you do get the bearings is that the seal type matches. When I received my last set of wheel bearings, they were of the completely sealed type - seals on both sides. Where the original bearings were sealed only on one side. I struggled a bit with what I should do, but in the end I felt that I should assemble the bearings as they were stock, with the two sides that face each other inside the hub having their seals removed and the space well packed with grease as the originals were. My feeling for going this route is that the mass of grease in the hub must work on the same principal as the mass of grease in the front hub, in that it can carry away heat and be a larger supply of grease made available when the heat does build.

Just a thought to share with you while you are going through the process. Can anyone else share their experience on the use of the completely sealed bearings in the rear hub?

Byron
Love people and use things,
because the opposite never works.
Top

The bearings that I received were completely sealed too. I had just begun to scratch my chin about that when I noticed that they were also too big. My plan is to get a proper set that is identical to the originals.
The company motto seems to be "We're not happy 'till you're not happy."
Top

WxMan wrote:I've been plugging away at this pretty constantly lately but haven't made much progress. My left rear bottom shock mount bolt sheared off with the greatest of ease when I was taking the rear end apart. In my efforts to remove the broken bolt I drilled out as much of the bolt as I could but then snapped off the removal tool that I was using. Probably the best option at this point would have been to weld a nut on the thing and go from there but I don't have access to a welder. Instead I spent a great deal of time with a burr on a rotary tool trying to remove the broken tool which was a much much harder material than the bolt. In the end I was successful however the time wasted on this was very frustrating.

Next on my list was to remove the rear axle parts in the hub. I could see that a previous owner had attempted to remove the axle nut on one side. The other was untouched. 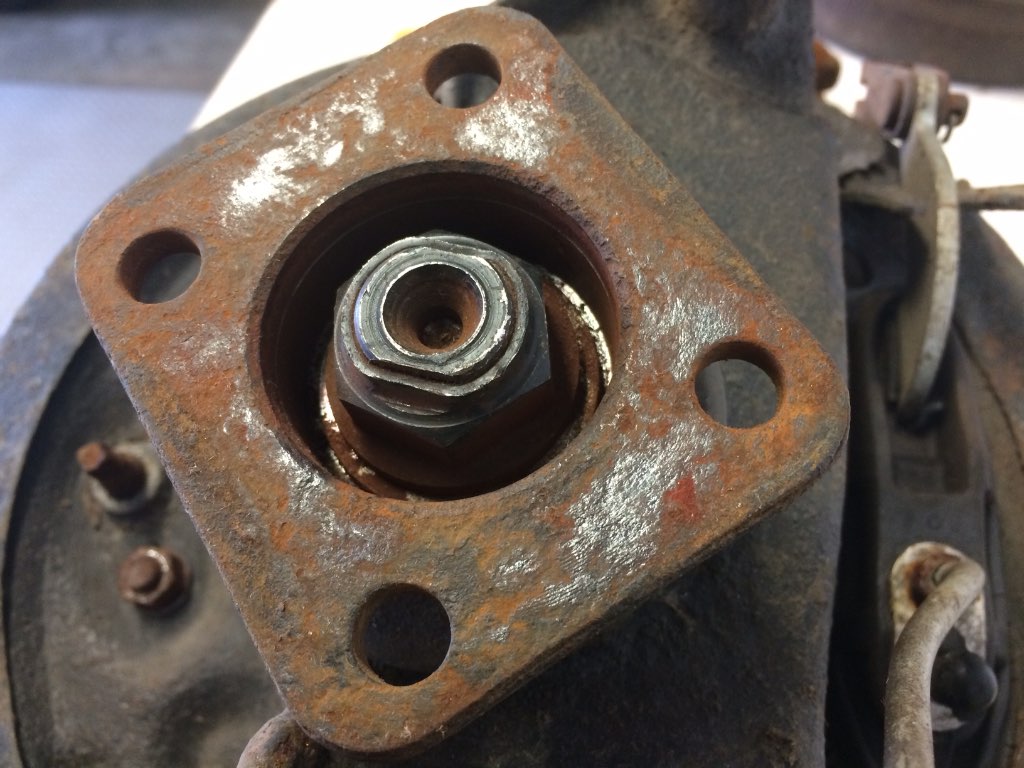 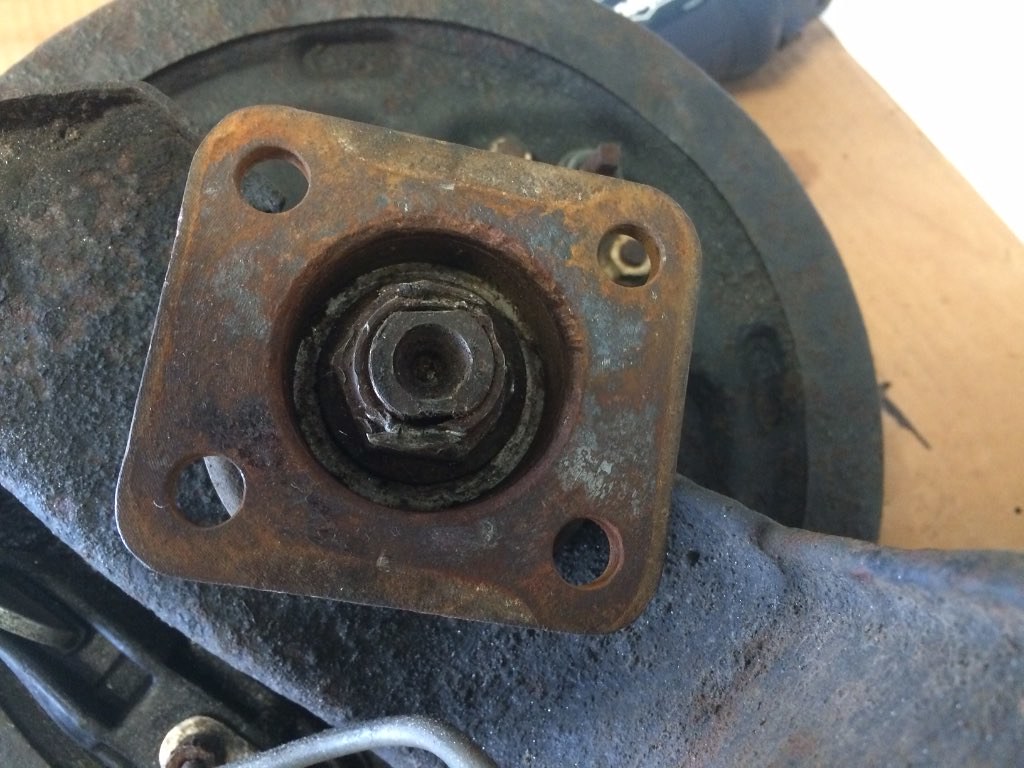 Axle nut worked over by a previous owner

I used a small cutting wheel on my rotary tool to remove the pinched part at the top of the nut that locks it in place. The axle nut that was worked over previously actually came off without much trouble. The one that was untouched before I started on it is really putting up a fight. I can't get enough leverage on it with my breaker bar to remove it. I happen to own an impact wrench but I don't currently own a compressor. I've been putting that rather large outlay off for a while but it seems it might be time to pony up. 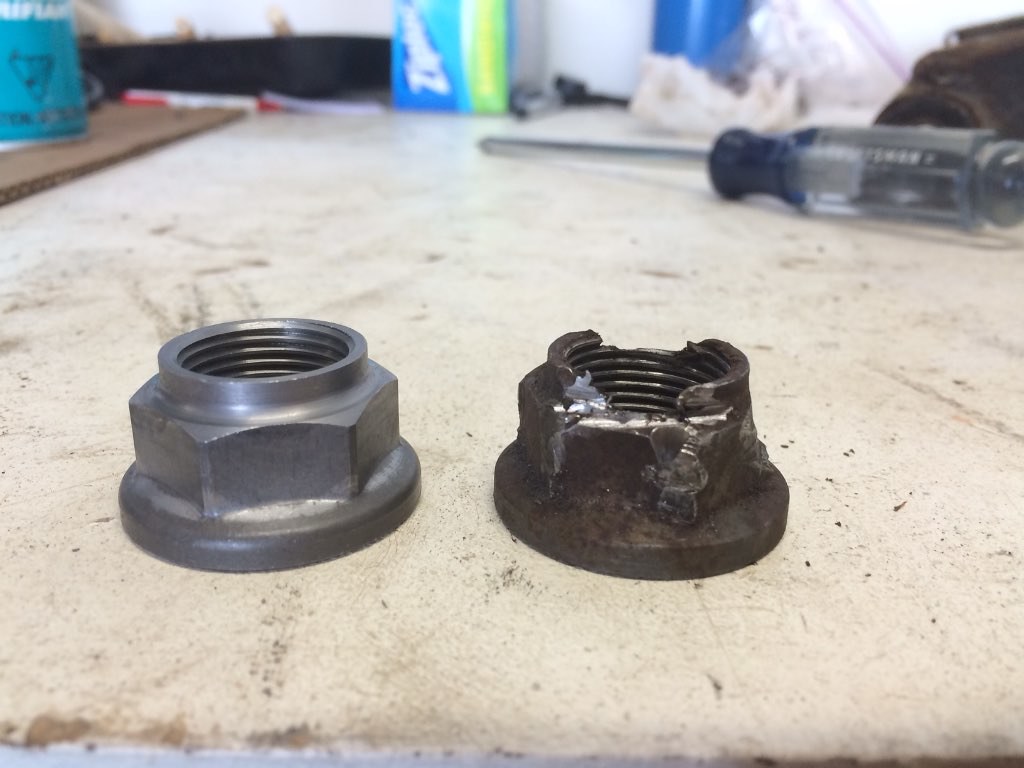 New Axle Nut and the old one.

Now that at least one axle nut is off, should the axle just slip out? It isn't and I'm reluctant to start whacking it with a hammer unless I know that is how it should be done. My Haynes manual only discusses solid axle removal and if it is in there I can't find any mention of this in the "Keeping your Datsun Alive" book. Anyone know how to get this thing out? BFH, press? 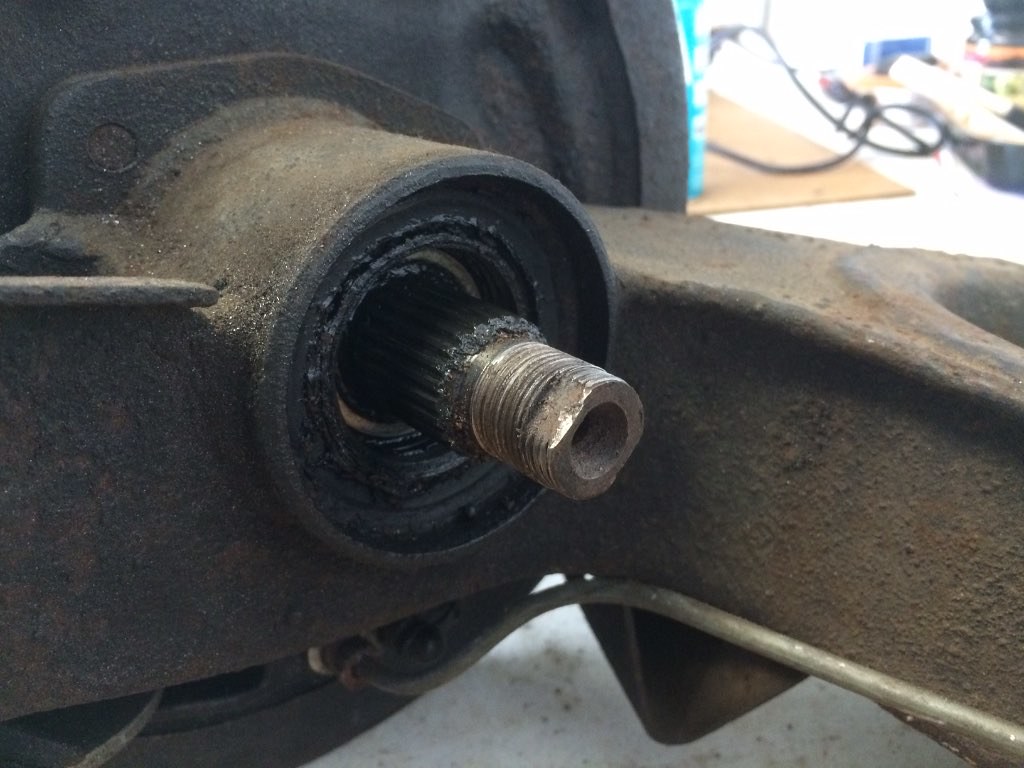 For future reference I believe it's Ritchlock Rentals in Langford that has the BAMF electric impact gun the guys use for the 200flb nut on their rotary engines...
Top

The diff and moustache bar before and after... 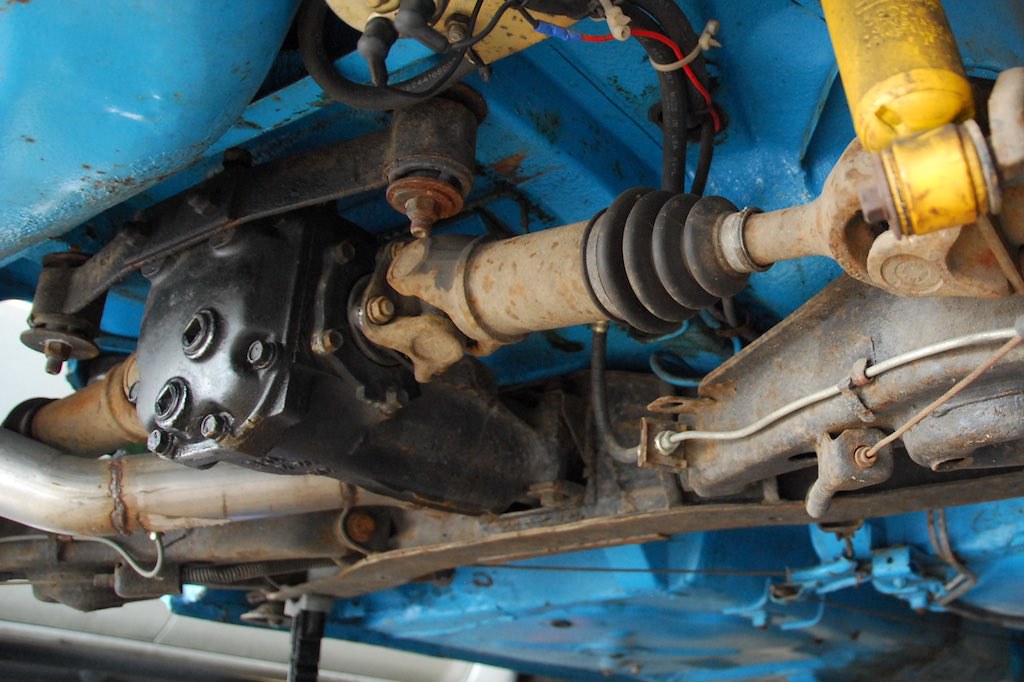 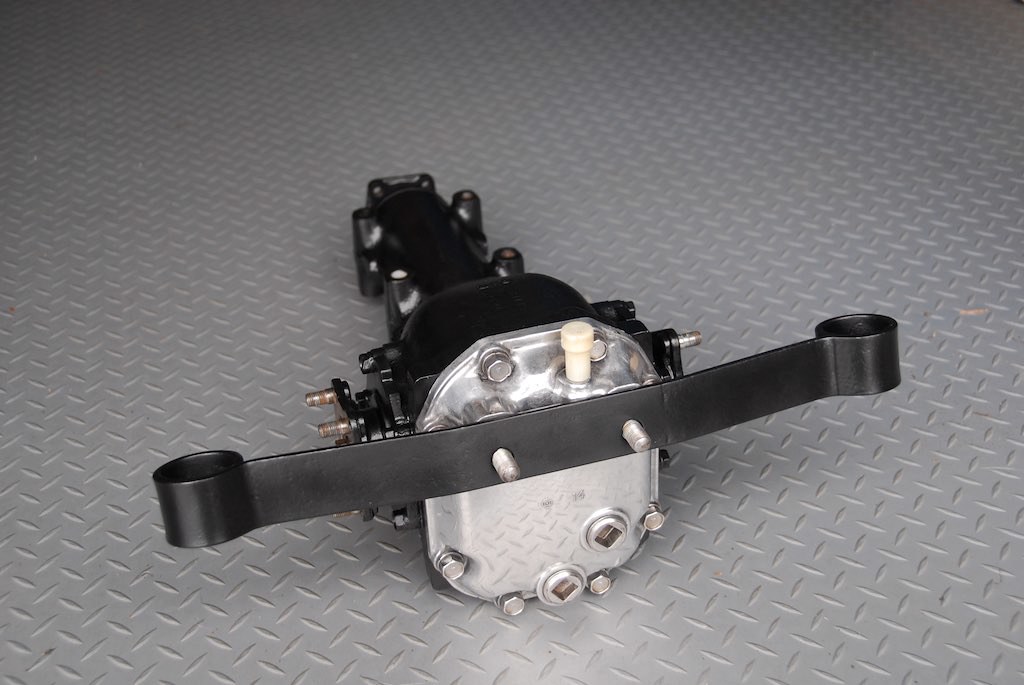 Stock r160 differential. Moustache bar bushings are on order.
The company motto seems to be "We're not happy 'till you're not happy."
Top

You may want to consider changing those studs to bolts. That way you it can be easier to remove the unit in the future. Looks good though.
Finished is better than perfect......
Top

Thanks for the suggestion. The thought had crossed my mind as I did have a little grief removing the diff and I wondered why all these diffs seem to be installed with studs? Does anyone know off hand what size bolts I should be looking for?
The company motto seems to be "We're not happy 'till you're not happy."
Top

It's been too long but I've finally made a small amount of progress. Byron was kind enough to install some of his brackets for me and then I had the rear crossmember blasted and powder coated. The rear control arms and brake backing plates were done as well. Yesterday I pressed in some new rubber rear control arm bushings. I also spent some time cleaning up my brake drums and gave them a coat of paint. 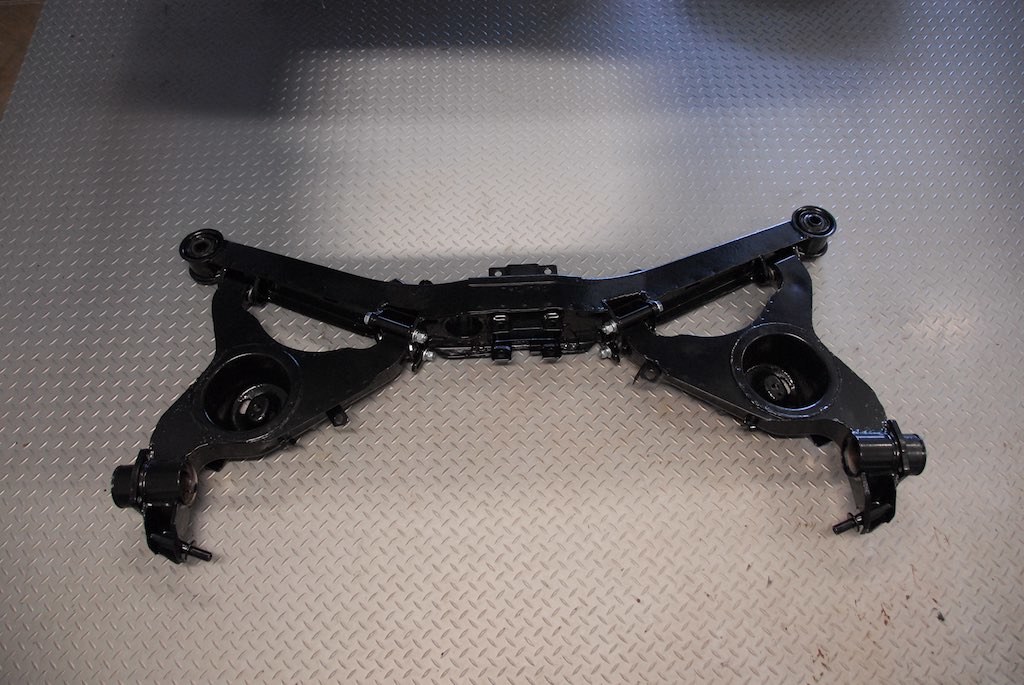 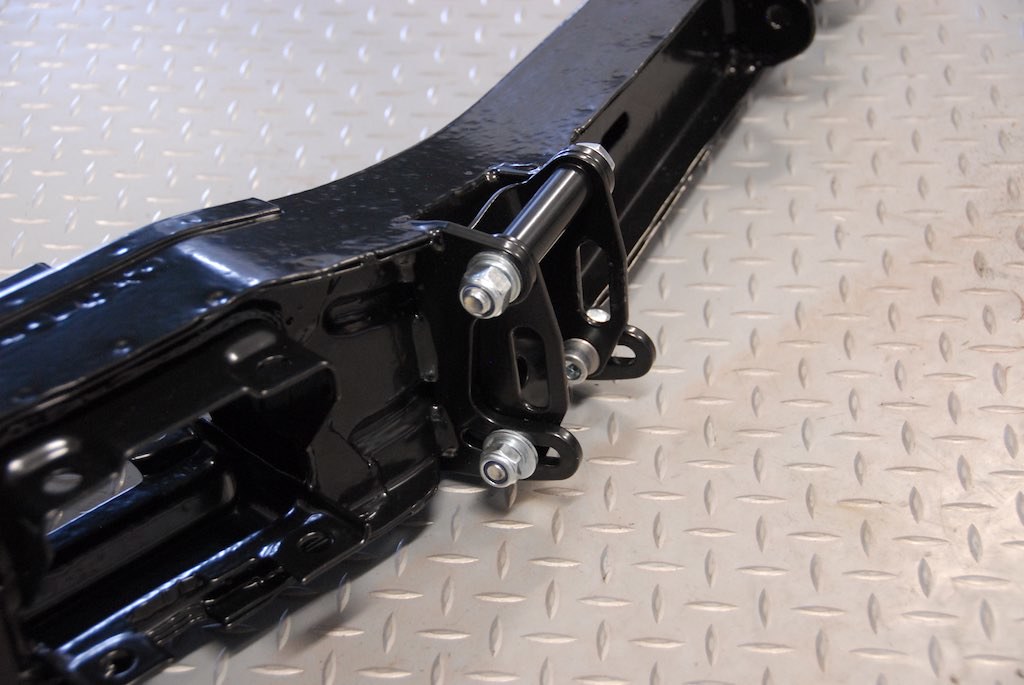 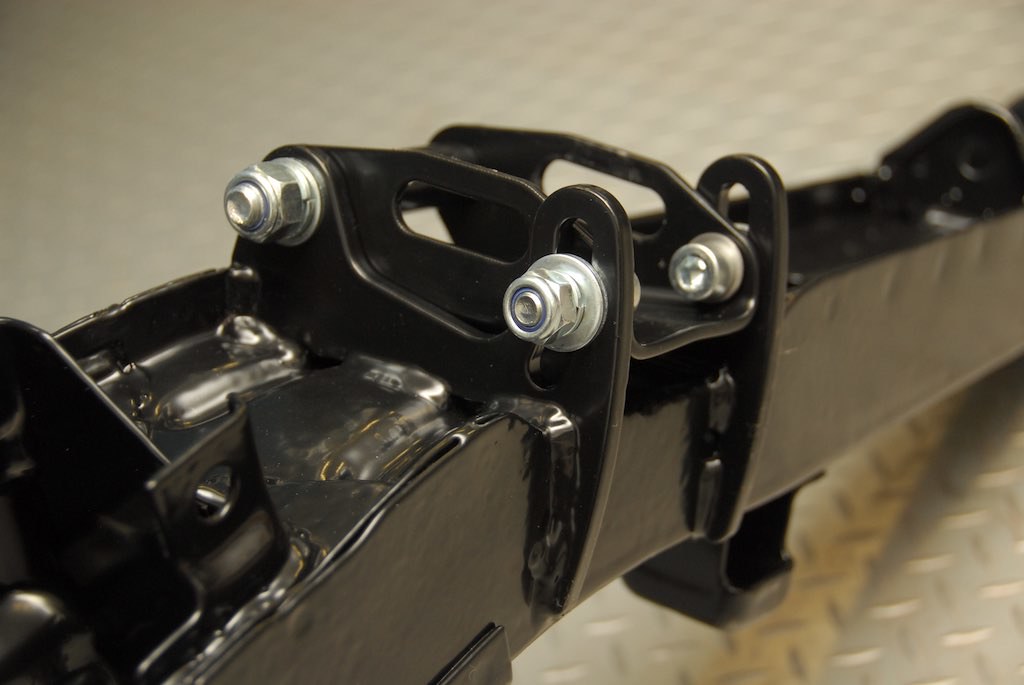 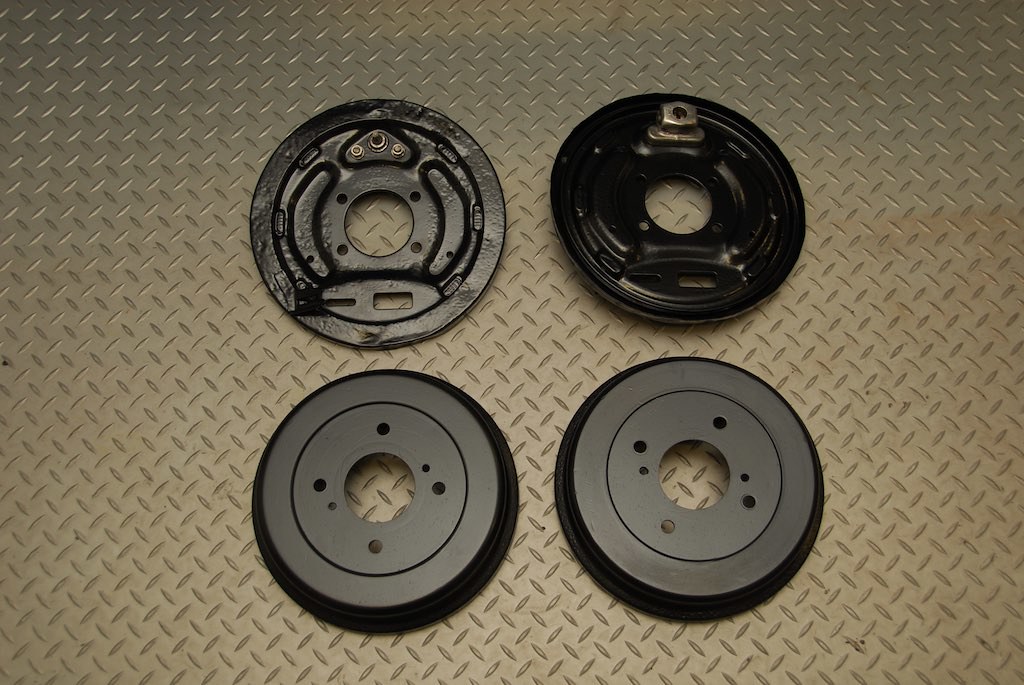 Thanks again Byron for getting that crossmember done in time for my trip to the mainland!

Wow, I just realized that it has been three months since my last update and most of the work since then was done by other people. I feel shame.
The company motto seems to be "We're not happy 'till you're not happy."
Top

It had been my original intent to leave most of the interior work on my car until the engine and suspension were mostly sorted but since that is taking forever and I needed a change of pace I decided to install some new inertia reel seat belts from Datsport that I ordered almost a year ago. My stock passenger side belt was in decent shape but the one on the driver's side was quite rusted and extremely difficult to adjust. 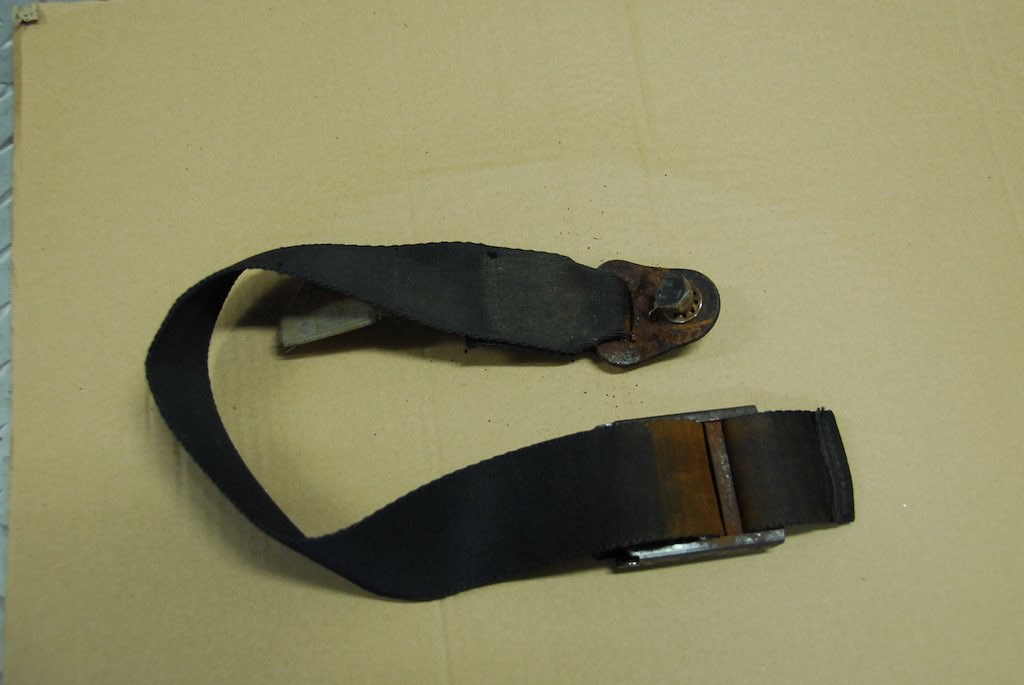 Not sure how these got so rusty 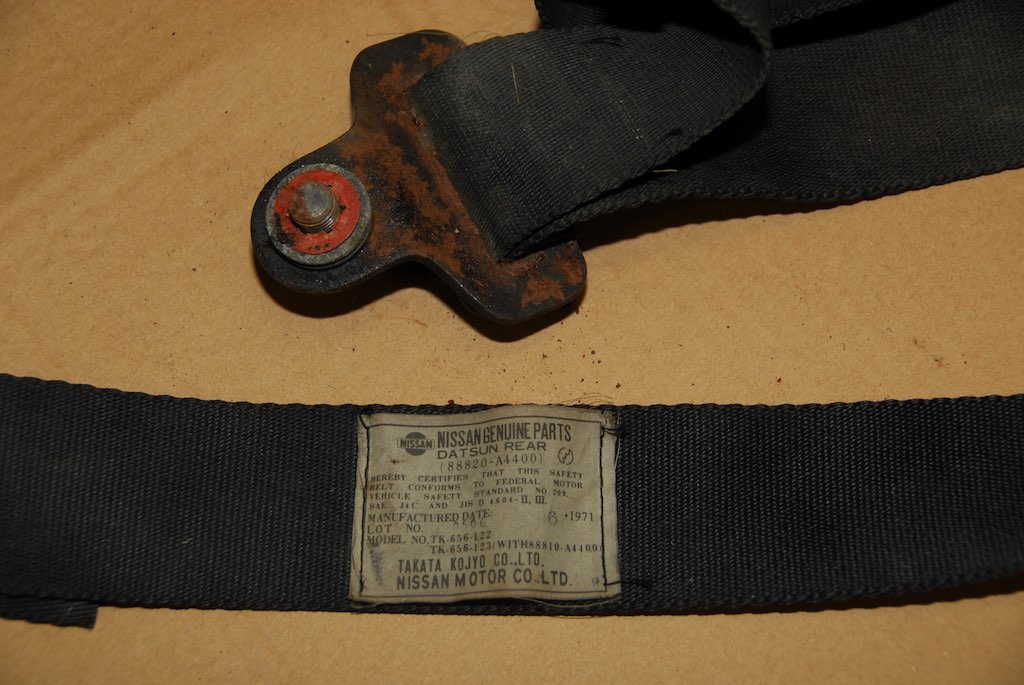 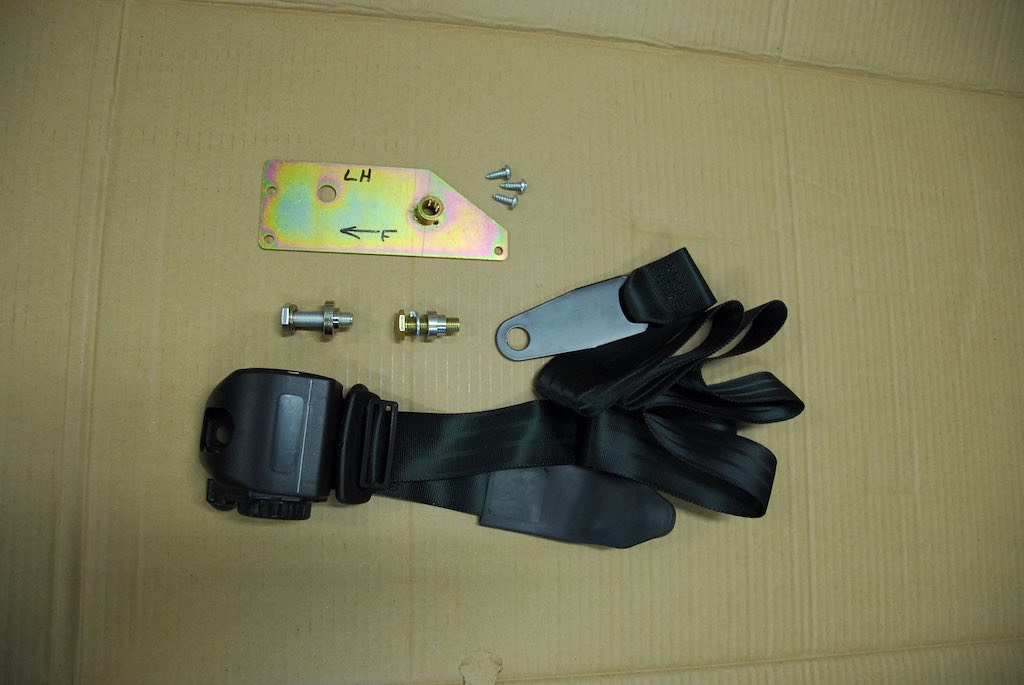 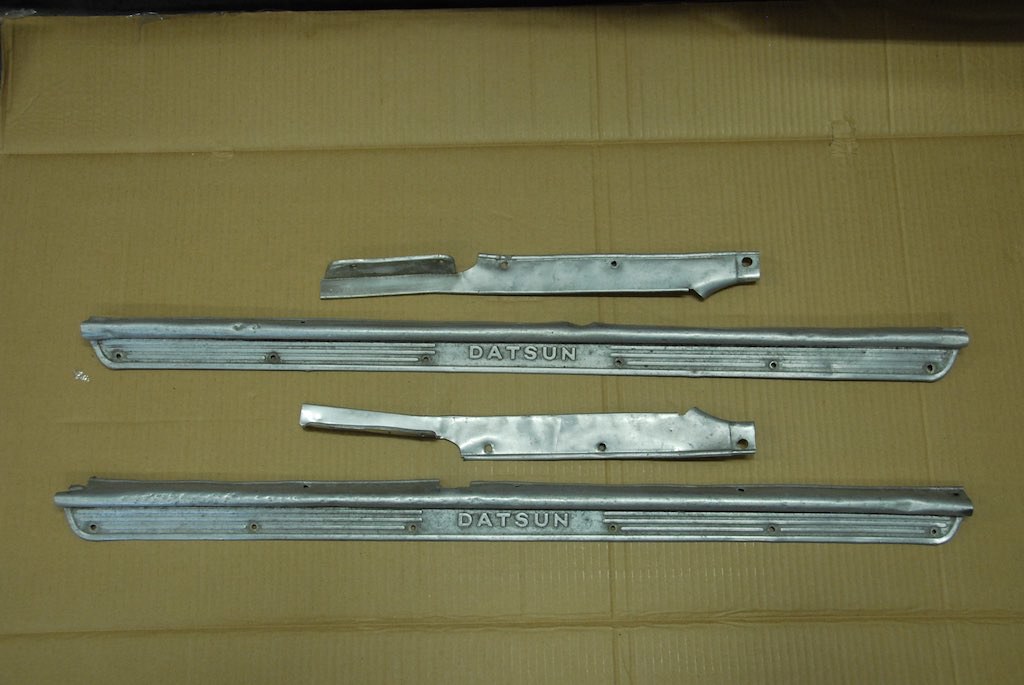 I had to remove the door sill plates to move the carpet out of the way so I could install the new seat belt mounting plate. These old aluminum door sill plates sure have taken a beating over the years. It's a shame new ones are NLA and no one is making reproductions. I wonder if it would be feasible for any of our machinist friends to make fancy new ones? I'd certainly be interested if the cost wasn't too nuts. Anyway, I cleaned and polished the old ones and got them looking a bit more respectable. 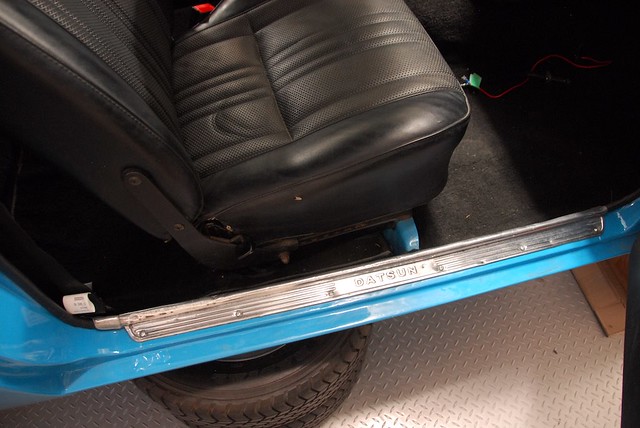 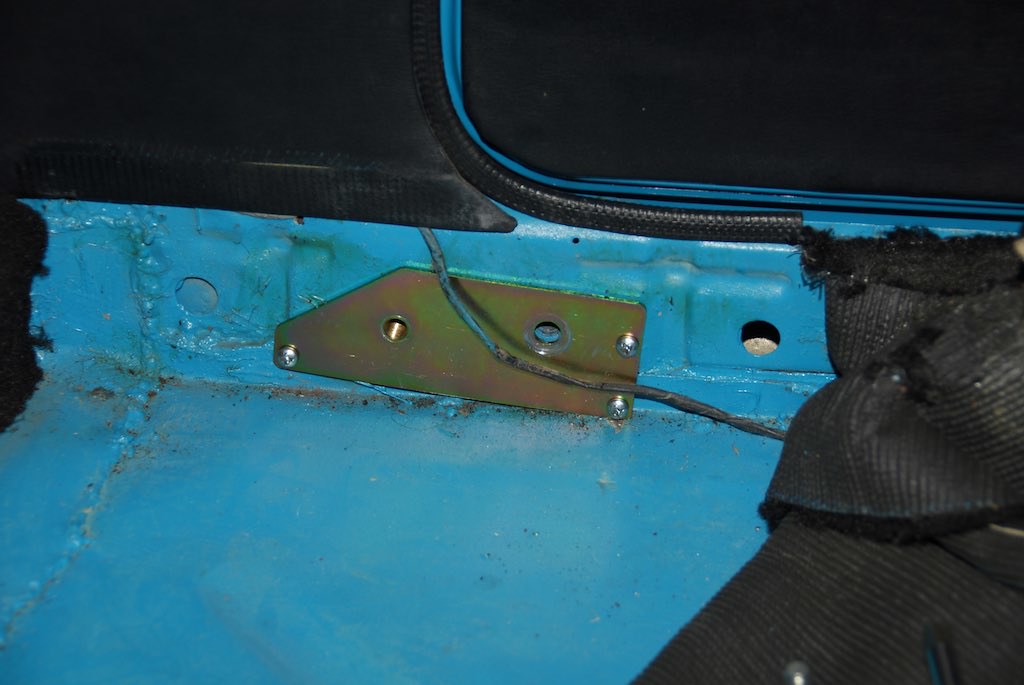 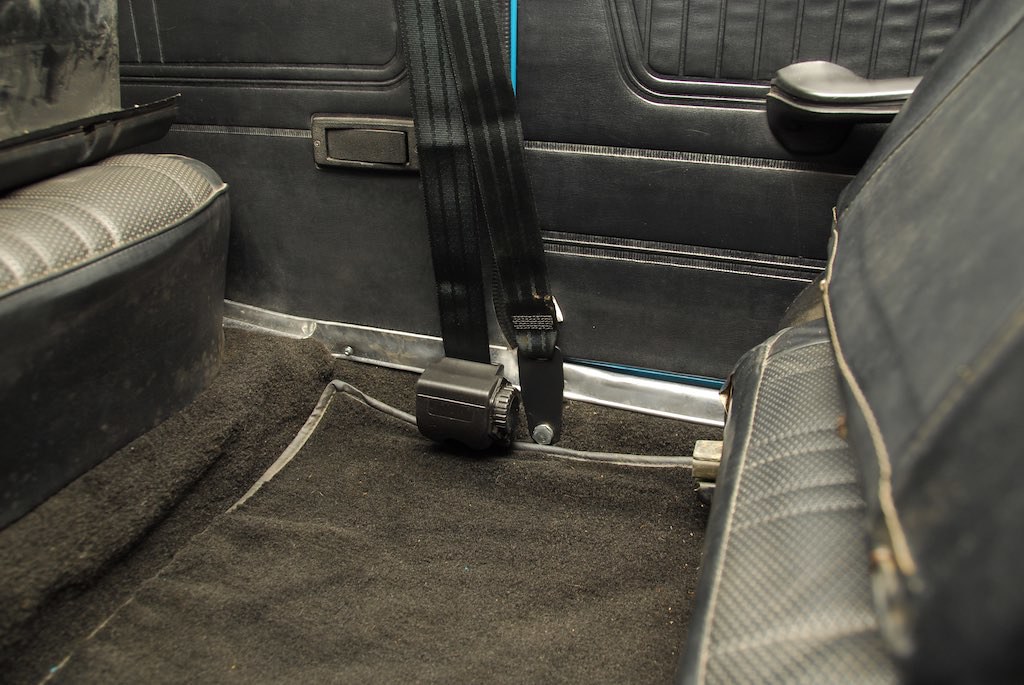 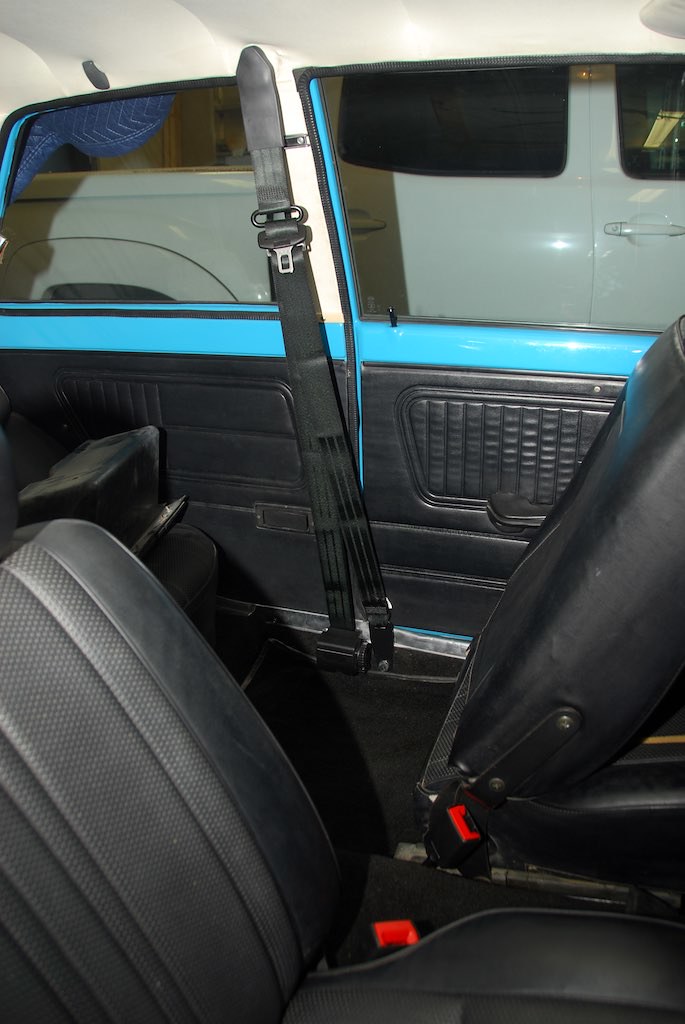 Belts look great! I'm guessing you'll find them quite comfortable too, with that strap coming down from the B-pillar to give you a pivot-point just over your shoulder.

I made a mistake about that when I ordered new belts from Seatbeltplanet-- super stuff, but I left the pivot at the top, which meant that the belt was always rubbing on my neck. I finally ordered some "loops" to move the pivot downward, to just about the same place yours seems to be.

Yeah, I tried them out briefly and it seems like the drop is just right for me. Datsport has never let me down yet. Their products that I have experience with seem well thought out, good quality, and tested. I'm a fan. The cost can sometimes be high but I know I'm paying for quality and great service which in my book is always worth it.
The company motto seems to be "We're not happy 'till you're not happy."
Top

The sill plates cleaned up really nice and those belts look good too. Is the top mount location there from the factory?
Top

The sill plates are better. That one looks decent in the photo because the glare from the polishing makes it harder to see all the nicks and dings that are very much still there.

Yes, the top mounting point for the belt is unchanged.
The company motto seems to be "We're not happy 'till you're not happy."
Top
Post Reply
119 posts